What a way to make a living

When Dolly Parton sang about the tedium and monotony of the 40-hour working week, she was right to bemoan the inequity of a situation in which workers provide their labour for little reward. However, it was at least in line with the hard-fought ideal of a fairly balanced day, as articulated by Robert Owen’s slogan ’eight hours labour, eight hours recreation, eight hours rest’. Reading that formula today, it feels that Owen’s ideal is just that, an ideal. The eight-hour day movement was a simple template for a simpler era. It was made for a world in which your labour was sold in a physical location, a real place bounded by brick. The ‘work’ itself was a physical endeavour, and categories of ‘work’ were concrete. Triangulating these two constraints gave you the ‘time’ component. ‘When’ you worked was defined by where you worked and what you did.

I wonder what Parton or Owens would say about the rapidly evolving and complex world of work today; a world where we are always available, constantly mediated and monitored by technology, and increasingly precarious. Would the banner declare a new formula? How might the lyrics for of the song go?

You’re in the same boat

In 2013 I knitted a giant recreation of Owen’s 888 banner, embedded with data around contemporary working patterns, for an exhibition entitled Time and Motion: Redefining Working Life at FACT Gallery in Liverpool. The banner (‘Punchcard Economy’ [1]) measured 5×3 meters, and was made of 1,790,700 stitches containing over 200 weeks’ worth of data from 116 participants. 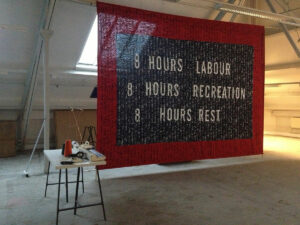 As a precarious freelance artist, I found the notion of such a well-defined work-life-sleep pattern balance almost utopian. But even those with a ‘proper job’ find their boundaries blurred. Technology is a big factor in eroding the factory walls and shifting the hands of the clock so that we are always available. Ironically this was especially true of the exhibition’s curators, who would often send emails late into the night. Clearly a contract is no protection from this tilting of the work life balance, especially within the arts.

Perhaps this situation was better anticipated and more directly articulated, a couple of years before Dolly, by Joy Division of Factory Records, on their song Digital:

Shortly after completing Punchcard Economy, I found a new space as part of Rogue Studios, in Crusader Mill. The nineteenth-century listed building was also home to seven South-Asian knitting factories. This curious mix of tenants was captured by Matylda Wierietielny and Zhi Li in their documentary The Art of Work [3]. The textile businesses had occupied Crusader Mill as long as Dolly Parton had been complaining about her desk job, effectively keeping the building alive. In 2016 I began collaborating with one of the knitting factories, Unique Knitwear, creating encrypted scarves and terrible glitch Christmas jumpers. Sadly, Crusader Mill was sold to developers Capital & Centric, and everyone was forced to move out in 2017, with only two of the factories surviving. Fortunately, Unique Knitwear were able to downsize [4]) and move some of their machines to a nearby site, and we’ve continued to develop small runs of scarves together. 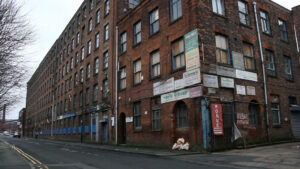 A few months before the pandemic I moved my own knitting machines from Manchester, UK to Montreal, Canada, clocking off from GMT and on to EDT. I expected it to be a challenging and precarious year: finding my feet, learning a new language, looking for work. I obviously didn’t anticipate how precarious the year would be, not just for myself, but for everyone. At the same time, the pandemic opened up new ways of working. It doesn’t really matter where or when I am located. I have been able to take on remote projects back in the UK that wouldn’t have been possible without a captive audience on Zoom. I have delivered lectures and taken part in workshops at 5.00am my time with students and colleagues logging in at 10.00am UK time. By the time it’s 9.00am in Montreal I’ve sometimes already done half a day’s work (or télé-travail as it’s called here). This was true of the Pause for Thought workshop, who thankfully assumed I was in the UK – I’m not sure they would have invited me had they known it meant such an early start, but I’m very grateful they did. Right now, I’ll take work wherever (or whenever) I can get it.

They just use your mind
And they never give you credit

Though Dolly Parton might not have foreseen the shift in working patterns away from the 888 model, she did articulate another, perhaps even more insidious encroachment of work: that of cognitive labour. It’s not clear whether Dolly Parton was referring to the use of one’s mind within stated work hours or job descriptions or beyond them, but it is evident that workers are not fairly recompensed for the production of their thoughts or emotions. The indistinction regarding the locations and times of work has been further confused by ambiguity about what actually constitutes ‘work’ itself. If we are just thinking about our work, either consciously or unconsciously, then are we working? Well, if we are neither living life recreationally nor sleeping, then we must, at least in some fashion, be in the service of labour. In truth I have been thinking, consciously and unconsciously about writing this article for the last month, without writing anything down. It has been like an open tab in my browser, tucked behind the others, unread yet quietly draining processing power, ticking over in the background. However, thanks to the transparency of the commissioners, I knew that this cognitive work was paid (at Artists’ Union rates), and provided I gave it the time it deserved – no more – then I would be getting a proper rate for the job.

More often than not, cognitive labour is unpaid. Whether in the form of strategic problem solving, creative thinking, or stress, cognitive labour is the implicit work that lies beyond the explicit tasks or times given, and beyond any framework of support. It is the occupation of the self (and the lives of those around you) by the work. (What are you thinking about? Oh, just a thing at work I have to do tomorrow). Cognitive labour is particularly pertinent to the arts, in which the steady germination of ideas and solutions and the intense pressured development of project applications coalesce to form the bummock of a gigantic iceberg that sits below water level, out of sight. We are only paid for the tip – and that’s if we are lucky enough to get the job, in which case we finally get to do the ‘work’. People with full-time paid jobs burn out from the stress of their work. Artists burn out on the way to work. The original script for The Matrix depicted humans not as ‘batteries’ powering the matrix, but as a neural network designed to distribute the cognitive load and expand the processing power of the Matrix. The idea was rejected by the studio who feared audiences would find the concept too difficult to understand, but perhaps now it is doesn’t seem so abstract to consider the notion of a system/institution/industry being unsustainably built on the collective emotional, creative, and problem-solving labour of its users doesn’t seem so abstract.

It’s enough to drive you crazy
If you let it

Despite Owen and Parton’s legitimate grievances with their own working environments, we should be careful not to assume things have improved, In fact, I fear we may have already peaked when it comes to addressing the work/life balance, and now find ourselves on the other side of the looking glass, in a backwards spiral of diminishing expectations. This perverse reversal of fortunes was crystallised for me in the vomit-inducing Twitter posts [5] of property developers Capital & Centric, gushing how their new tenants can enjoy working remotely. Having ‘regenerated’ a working textile mill in Manchester, evicting several decent South-Asian knitting factories whilst fetishing its industrial heritage, this property developer shares their vision for the future of the factory floor as evidence of progress:  Zoom calls in pyjamas set to an authentic backdrop of wooden beams and exposed red brick.

9 to 5, yeah
They got you where they want you
There’s a better life
And you think about it, don’t you?
It’s a rich man’s game
No matter what they call it
And you spend your life
Puttin’ money in his wallet

postscript – Sam has now found an actual full time 9 to 5 job, teaching Intermedia Arts at Concordia University, and now blames Moodle and Outlook for his lack of time.

I am an artist, educator and videosmith from Huddersfield (UK), whose practice combines projection design, interactive video installation, community engagement, and digital textiles. I am interested in the overlap and interplay between digital and analogue hybrid design processes and the possibilities of combining the two in production and performance.

Contributed as part of Workshop 1