The title of this project began as a pun: ‘pause for thought’ – as in, to give one pause for thought, but also, when confronted by media that outstrip our capacity to think them, to take the time to pause and think. To think media, we thought, requires a special kind of effort, because so much of our time spent thinking is shaped by them. And yet think (them) we do.

BREAK
v. interrupt (a sequence, course, or continuous state);
n. an interruption of continuity or uniformity.

In-between submitting this project for funding and getting the go-ahead, along came an interruption of world-historical proportions: SARS-Covid-2.

What to say about this (ongoing) crisis? It’s too much and too soon to process its large-scale ramifications, personally – from my particular position of privilege – and, if you like, ‘professionally’. I’m just a media scholar. But nor can it be ignored.

Tell its story through the think pieces the pandemic generated and you’d be forgiven, early on, for thinking that the lockdowns it necessitated gave us time in exchange for taking away our ability to socialise. Time supposedly freed from routine and habit: the commute, the pointless meeting, small acts of consumption, small talk. Time to reflect.

A year and a bit in and this time feels even more mediated. Put life on hold and most of what’s left is lived through media: online meetings, group chats, remote sessions, live feeds, broadcast streams, Zoom socials.

Perhaps there hasn’t been any more or less mediation than before the break; just less options for immediate being-together.

Time took a funny turn in London lockdown. When did it begin? Which wave, peak, plateau, or trough are we in, on, over, under? How is time measured out and marked when it’s disassociated from habits built around work and social calendars? Is there going to be an after? If so, what kind of time will it be, and for whom will its (re)distribution feel even? I suppose one can’t see the shape of the interval until its boundaries are fixed.

STOP
v. (of an event, action, or process) come to an end; cease to happen;
n. a cessation of movement or operation.

I caught a train into the city for a meeting for the first time recently. Out of practice (keep right, not left, unless the sign says to keep left), not sure how much distance to keep (can I pass that slow-moving person in that pedestrian subway?), no longer used to navigating the app I used to use to make timetables connect (I should’ve changed at London Bridge), out of practice for rushing for that train to make it to that shop to get that thing for that task – I found myself, for the first time in a long time, with time to spare.

Nothing interesting in the feed. Any desire to consume something to kill time rendered perilous by the virus’s ambient threat. No people to look at – all anonymised by masks, and anyway, public sociality has yet to make new norms. Marking time takes work – spare me.

RESPITE
n. a short period of rest or relief from something difficult or unpleasant;
v. postpone (a sentence, obligation, etc.).

Whether or not one can cease being mediated isn’t really a serious question. Disconnect from what? Catherine Malabou:

If I can’t get anything like a more proper kind of existence from my withdrawal, if getting into the wild does not give me anything else but the very absence of wilderness, if everywhere I go is like everywhere else, then staying where I am, here, there, with the others, consuming, logging on, playing all sorts of games, enjoying this good capitalist global nothingness, doing all this, then, amounts to living in the woods. Is this no less authentic, that is no more inauthentic, than living in a retreat?

As though making our way into and out of the woods doesn’t require a civilisation’s span of techniques. Better to ask, I think, how one makes time. Neither outside of mediation nor aside from it – how does one even find the woods without a GPS? – but, more simply, in the present (however you want to think it).

INTERRUPTION
n. the action of interrupting or being interrupted.

The metaphor of ‘information flow’ has a lot to answer for. It’s constantly being interrupted – that’s how we’re able to experience it. Enter an address, wait; query, serve, load, render, display. Refresh and repeat.

The question is, can a critical practice be strung together out of these interruptions? We think and make with media all the time, generating ad hoc ways of knowing and ways of doing as we dip in and out of their ‘flow’. What the pandemic changes is their tenor, necessity, and, perhaps, their urgency – but not really their mode.

Small strategies; pauses. This is what we – this project – are trying to think.

Pause (n.) a temporary stop in action or speech: a media technique for making signal out of otherwise-uninterrupted noise; or, for making of noise, signal. Time, too, is lent form by interval. For example, from Samuel Beckett’s last play: 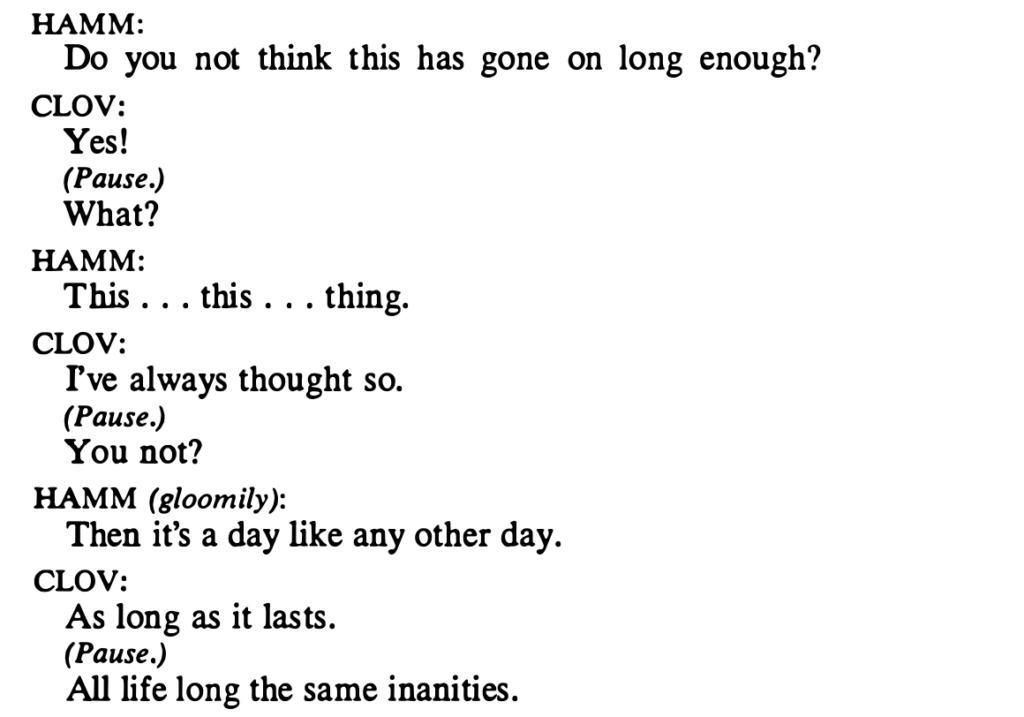 Scott Wark is a research fellow for the Wellcome-funded project, ‘People Like You: Contemporary Figures of Personalisation’. He is based at the Centre for Interdisciplinary Methodologies at the University of Warwick. He researches online culture, amongst other things.

Contributed as part of Workshop 1