Acceleration has always been tied to specific economic and/or political interests (Rosa 2013) and this paper discusses acceleration as a political process aimed at controlling temporal experience. We do so by following Mead’s Philosophy of the Present (1931) and argue that time is constructed through events; as such, the present is the “constant appearance of the novel from whose standpoint our experience calls for a reconstruction which includes the past” and the future.

From this perspective, the acceleration of events obviously has important implications for how we perceive the flow of time. In terms of this, the acceleration of events is to be seen as: 1) a diminishing of the intervals between events, which may prevent an ongoing (re-)construction of pasts and futures and thus, in a sense, “perspective”; 2) a shorting of the duration of events; and 3) acceleration can also be related to the ways in which there can be multiple instantiations of an event, arising in multiple perspectives in non-linear sequences. This is made increasingly obvious by trends in digitalisation. Collectively, these three processes raise important questions for how events collectively structure time.

By discussing an incident on the Lincoln Memorial in Washington DC in 2019 where there was a stand-off between a young, white high-school student with a Make-America-Great-Again Cap and a greying Native American activist we draw attention to how a Mead-inspired perspective on the present as (accelerating) events may add a complimentary understanding of how the contemporary mediation of events construct time. 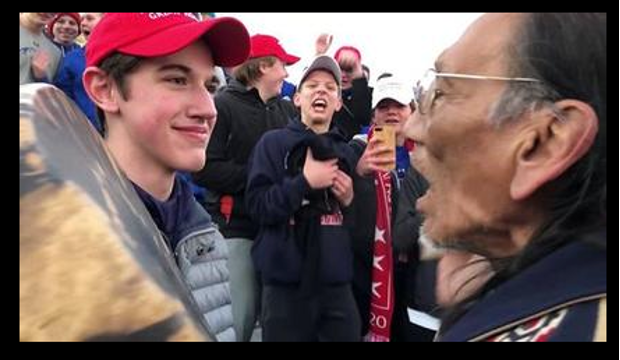 The generally intensified mediation of local incidents as larger social issues is here further complicated by the many layers of interrelated mediations that developed through and in relation to the re-circulation of in the still and live pictures of the encounter. In this sense, the initial encounter constituted the beginning of a mediated event that was made up of re-interpretations of initial encounter as well as the interpretations by others. This lack of interpretive closure in a sense constituted a prolongation of the present in the sense that the event kept emerging. Adjacent to this, there were significant tensions in relation to both causation and anticipation. What were the antecedents of the encounter? Who or what should be blamed? And what did the encounter entail in terms of immediate consequences and long-term changes? As such, it also raises questions of how to demarcate an event in the digital media landscape and what this means for the flow of time.

Drawing on this example from online news coverage, this paper thus adds both empirically and theoretically to the discussion of acceleration and event experience. We show how specific commercial and/or political interests compete to define the present, thus preventing some events from restructuring our past. For instance, many politicians have become adept at manipulating the dynamics of acceleration, clogging the present by constantly layering events that call attention to the now. Consequently, digital acceleration is revealed as an ideological process manifested in the digital circulation and layering of public events.

Philip Pond specialises in the study of software systems and their influence on the production of meaning, especially the relationship between digital speed and informational crisis. He is author of two books. Digital Media and Making of Network Temporality (2021) explains how time can be reconfigured in digital systems with disruptive consequences. Complexity, Digital Media and Post-Truth Politics (2020) proposes a framework for studying destabilising interactions between the digital and political systems.

Henrik Bødker is an associate professor at the Media and Journalism Studies Department at Aarhus University, Denmark. His most recent work focuses on how various temporalities linked to climate change intersect in journalism and has recently co-edited volume (with Hanna Morris, UPenn) Climate Change and Journalism: Negotiating Rifts of Time (Routledge, 2021). He is currently working on project that investigates how journalism relates to rhythms of nature. His work appears in Media History, Critical Studies in Media Communication, Digital Journalism, Journalism and Journalism Studies.

Contributed as part of Symposium: Making Sense of the High-Speed Society