Questions that remain unanswered: what would it even mean to ‘make sense’ of a moment? What is the purpose of said sense-making?

The workshop was framed as a space in which we might work towards some kind of sense-making. I had mixed feelings about the task. On the one hand, some of us enjoy talking. On the other, talking doesn’t necessarily bring us anywhere (which is ok). The idea was probably to theorise; or at least to say things that might provide the basis of some subsequent theorising on our hosts’ part. And I suppose that theory is a way by which one might ‘make sense’ of things happening in the world, the state of a given moment, etc. etc.

Full disclosure: I harbour some general scepticism towards the motivations of people hoping to ‘make sense’ of a moment (I tried to do it once, it almost drove me mad).

I hate to speak in platitudes, but I don’t believe that I have anything truly interesting to say on this matter (it’s almost 2 am, this piece is twelve days late). So I will state the (somewhat) obvious, depending on your own philosophical outlook: the world has been a profoundly absurd place in the last few years. At some point during lockdown number three (three!), something snapped, and nothing happening around me seemed to make sense anymore. Maybe others experienced this, too. I guess my way of dealing with the general state of the world since then has been to accept it for what it is (strange, confusing, cruel, nonsensical), to try to carry on moving within it, and to laugh at it, where reasonable.

Sense-making, theorising, and strategizing – it is all truly exhausting work, and sometimes with little reward. I don’t envy the people who decide to do it for a living. All I can say is that I’ve hung my theory hat up on the wall for now. It doesn’t mean I don’t care. I would not describe myself as ‘indifferent’ (an adjective that, I believe, is often confused with ‘ambivalent’). No; I feel such a vast range of conflicting emotions every single day, in response to almost everything I see, hear, read, experience, that sometimes I think I might explode. It’s just that sometimes coping with the inner turmoil this engenders, in this particular moment, is simply to sit with it, to allow myself the freedom of not making sense of any of it. If this is a moral or intellectual failing, so be it, but self-preservation must count for something. 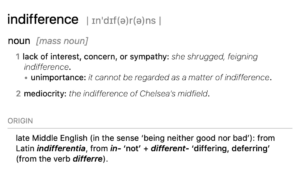 Huda Awan is a writer based in London. Her writing has appeared in VICE, Tribune, Literary Hub, Review 31, and The Quietus. She also works in social media in her spare time.

Contributed as part of Workshop 2